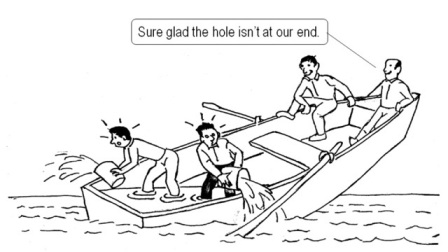 Me – “The team is responsible for Quality!”

Dev Mgr – “Yeah, I hear that, but what will help is to go one level deeper – let’s realistically identify what can and should be done by “developer” and “tester” resources.”

Lots of managers and their employees (and HR) struggle with this concept of team responsibility.

Clearly there will sometimes be tasks on stories that involve a level of coding skill that can only be done by someone with the title of Developer. There also will be some tasks that would be much more efficiently done by someone with years of testing experience. This doesn’t change the fact that when you commit to stories in a sprint, you’re expected to get those stories done. It doesn’t matter who is actually available to do the work.

In the beginning of each sprint, the delivery team takes “Ready” stories from the backlog and works through them and creates tasks and estimates them. The team should know what their capacity is for that period of time. This means you should have an idea of how much time it will take to code and test and otherwise produce that work. All of it, not just the coding. If people are unavailable that sprint, clearly you should take on less work. If some of the test-related tasks don’t fit within the capacity of the testers you have on your team, you have a choice: either remove some work from the sprint and use the extra time for the programmers to do training and/or help with other projects outside of the team OR have other members of the team take on the remaining testing tasks.
If testing, or any other specialization on the team, is causing a bottleneck, the answer isn’t to shove more work into the bottle! What you do is work together to keep the flow going. If that means programmers doing more testing, fine. If that means testers doing more tasks that traditionally fall to programmers, fine. If that means analysts doing the same, or any other permutation, fine.

If something doesn’t get coded – that’s not a single programmer’s fault. The team should have known about it. If something doesn’t get tested, that’s not a tester’s fault! It’s the team’s fault for not making sure it got done. Blaming isn’t a productive method of getting things done. We succeed as a team and we fail as a team. And when we succeed, we reinforce and build upon the things we’re doing right. When we fail, we recognize the reasons for the failure and work to improve for the next sprint.

Let’s go back to the discussion – assume I said all that stuff above.

Dev Mgr – “Alright – so we come up with tasks together and then assign them to people – that will lock them down and we’ll be able to tell Project Management what resources we have free, or what resources we need to get the work done in this sprint.”

Note that making sure you have the capacity isn’t the same thing as assigning tasks to people. Tasks, optimally, should be pulled by people capable of the work only at the point in time that they can start working on them. It isn’t efficient to have a task assigned to someone who’s working on something else while another person could be doing that task. Now you may *know* simply because of the nature of the task that a particular individual has to do it. That’s fine. But be aware that’s risk you’re taking on. If nobody else is capable of that work, then you have to be very sure that particular individual has the capacity in that sprint to do that work. If you have a lot of work like that, it would be advisable to pair that person with someone to work on the tasks together. After a time, then you’ll have two people capable of doing that kind of work and you’ve lessened your risk!

Me – “So you’ve got it now, right? You’ve got a cross-functional team that self-organizes. You don’t need to assign tasks to anyone or wrangle with Project Management over time estimates and the availability of people.”

This entry was posted on October 21, 2011, 4:46 pm and is filed under Agile, Testing. You can follow any responses to this entry through RSS 2.0. You can leave a response, or trackback from your own site.